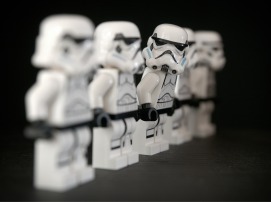 Wow. I saw “Rogue One: A Star Wars Story” on opening day in IMAX 3D. I give it 3 ½ out of 4 stars. Impressive…most impressive. The Chicago Tribune gave it 3 out of 4 stars and I liked the review. Check out the review here.
I am not going to give away any spoilers or additional information about that movie that you will find in the trailers that Lucasfilm has released. I do agree that this is not a kid friendly movie. There are laughs and light-hearted moments but if you want to take your four or five year old, I would recommend against it. The look and feel of this movie is similar to “The Empire Strikes Back.”

The Empire Strikes Back

I was skeptical at first of these side story movies that are not the official Episodes that George Lucas created back in the 1970s. At this point it really does not matter since “The Force Awakens” was a new screenplay and not the storyline that Lucas wrote. I loved Episode VII (I gave it 4 out of 4 stars) and I loved “Rogue One.” There is a young Han Solo movie in the works and that should be fast-paced, action packed, and lots of scoundrel type moments. I read that it will have a Western type theme to it. Hmmm…interesting

“Rogue One: A Star Wars Story” is a fantastic movie in the Star Wars Universe. This is a thrilling tale that fills in important events between Episode III and IV. I recommend seeing it in IMAX and 3D for the full effect. You will not be disappointed!
Work Cited:
George Lucas’ version of Episode VII